Leticia is a town of approximately 40.000 inhabitants, located in the southernmost tip of Colombia, surrounded by the great Amazon rainforest, facing the Amazon River and bordering the towns of Tabatinga (Brazil) and Santa Rosa (Peru). Since it’s foundation in 1867, the city has developed as the main urban center of the Amazon department.

Although isolated from the main trading routes, it is the most important commercial center in the tri-border area between Brazil, Peru and Colombia. This makes it a magnet for all people of the region; of which the vast majority are indigenous from different ethnic groups representing more than 70% of the population, who come to Leticia in search of better employment opportunities, education, health care and other public and social services.

Given this dynamic and the current infrastructure of the city, the capacity of local governments to meet the needs of the fast growing urban population is inadequate and insufficient. The immigrant population finds that factors such as housing shortage and policies of the Land Management Plans limiting urban expansion, force them to join the thousands of people who live in informal settlements on the margins of the city. These are mainly located in zones that are at risk, such as floodable areas of the banks of the Amazon River, streams or on the border with Tabatinga where the two cities concatenate into a no-man’s-land.

n the other hand, Leticia is located in the middle of one of the most bio-diverse ecosystems on the planet, making it the second most popular destination for tourists in Colombia and the first for researchers from different fields interested in the biological and cultural characteristics of this region.

The constant tension between the inevitable urban growth of Leticia and the need of preserving the Amazon rainforest and its immense biodiversity and cultural richness, make it even more relevant and urgent to explore different ways of inhabiting this territory, building sustainable human settlements, cultivating the land in order to improve self-sufficiency and achieving prosperity for its people while keeping a low impact in the natural balance. 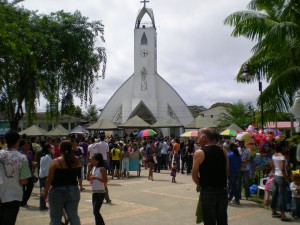 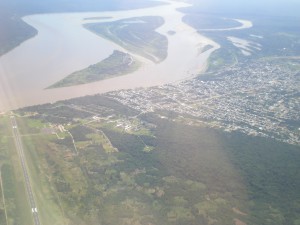